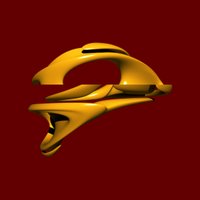 There comes a time when a men has to sit down and clean up his desktop and mailbox. Suffering it's called in the e-mind of a heavy computer-user. But I'm brave and so I began, I notified some old friend.. it was actually fun you know. You should "get up and get out, start doing it yourself", your desktop looks like a mess.

Anyway here's something I stumbled upon I'd long forgotten, there was a day when I was totally into 3D design, not those asshole CAD-CAM programs no, just rigid parameter itteration-minded freeware programs written by a hermit growing a beard getting fat. But hey that's perfectly ok you know. I guess I'll wind up being one of them one day too... But enough dissing these brave gentlemen who conquer the world designing the greatest virtual architecture ever made.

It was at the advent of the year 2005 that I downloaded Gaston 3D, it was this thing called portraitware = you have to send the developper a portrait picture of yourself and then he/she sends you a copy of the program finely crafted by hand. I did, I send Leo Fink my picture and received a free copy of his baby called Gaston.
(a picture of me at Trafalgar Square)