“Why So Serious?” was a 360 alternate reality experience - deep, pervasive, interactive, and viral. Centered on the web, yet branching out over mobile, mail, flash mobs, scavenger hunts, casual games, user generated content, collaborative narratives, streaming video and more, the audience was immersed into the saga of Gotham City from the last frame of Batman Begins to the opening scene of The Dark Knight. Over 10M unique participants in 75 countries made “Why So Serious?” a new benchmark for integrated campaigns. The Dark Knight was the most successful movie of 2008 and 2nd highest grossing film of all time.
1 comment:

tags > Batman, marketing, The Dark Night, viral, Why so serious

So this is the result of a collaboration between Blu and David Ellis.

After some years watching and appreciating each other works they finally realized this video together. It has been made in 10 days during the Italian Fame Festival. Studiocromie made this possible and organized everything in the best possible way down in the wild-wild-italy.
1 comment:

How to make an earth sandwich?

The earth sandwich idea is similar to the idea of "socle du monde" by Piero Manzoni, but still funny and nicely explained.
No comments:

Free! Why $0.00 Is the Future of Business. A book by Chris Anderson

This map and the data behind it were compiled by Dr. Henry Niman, a biomedical researcher in Pittsburgh, Pennsylvania, using technology provided by Rhiza Labs and Google. The map is compiled using data from official sources, news reports and user-contributions and updated multiple times per day.

Rhiza's web-based mapping product, Insight, is helping Dr. Niman get official and unofficial data into the tracking system faster while giving researchers and the public many options for viewing the data in a useful and understandable way.
No comments:

Halo 3: ODST is a standalone expansion for the first-person shooter video game Halo 3.[1] It will be released as an Xbox 360 video game console exclusive on September 22, 2009. Players assume the roles of elite human United Nations Space Command soldiers known as Orbital Drop Shock Troopers (ODSTs) during the events of Halo 2. After the alliance of alien races known as the Covenant attack Earth, the player explores the ruined city of New Mombasa to discover what happened to their missing teammates, separated from each other as they entered the city.
1 comment:

Artificial Paradise, Inc is an experimental film anticipating a future where a major corporation has developed an unique software, based on organic virtual reality, which holds all the lost memories of humankind. A user connects to this database of the forgotten … what is he searching for?

University of Twente (or Twente University) located in Enschede, Netherlands, offers research and degree programmes in technology, and in the social and behavioural sciences. Studio Dumbar was approached to develop the visual identity
and Buro Knapzak developed this experimental motion piece. 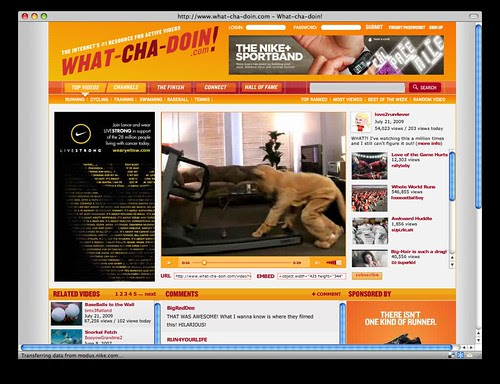 Who am I? Ask the Internet - Personas

A component of the Metropath(ologies) exhibit, currently on display at the MIT Museum by the Sociable Media Group from the MIT Media Lab. It uses sophisticated natural language processing and the Internet to create a data portrait of one’s aggregated online identity. In short, Personas shows you how the Internet sees you.

Don't quite get the medical connection :) — but heck the internet is always right thought, ain't it. Sure must agree with Bnox, watching the data being crunched was very impressive.
No comments:

Hire the younger, and better

"We hire from a generation of people, younger than me, who understand the way the world is currently configured and want to be the first people to create an app or redesign something rather than just get a 30-second film out of the building shot by the latest director."
— Laurence Green, Fallon London
No comments: 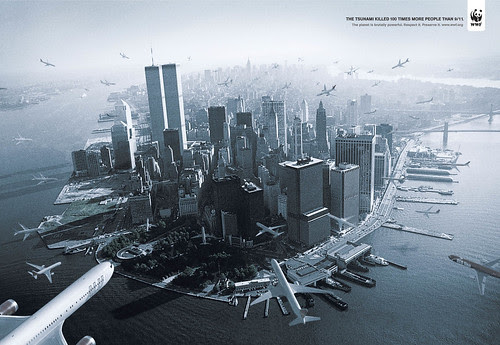 DDB Brasil has already been stripped of its One Show Merit award. The negative buzz is enormous ...

AdAge reports:
• DDB Brasil Did Make Video Version of Reviled WWF Ad -- and Submitted It to Cannes
• In Wake of DDB Brasil Scandal, One Show to Ban Scam-Ad Creators for Five Years

A summary from AdAge:
In a bold, unprecedented move to stem the problem of scam ads in advertising awards shows, the One Club is implementing strict new rules that ban agencies -- and individual members of creative teams -- found guilty of making fake ads for a period of five years.

The move is in response to one of the most public and offensive cases of fakery in recent memory, the "Tsunami" ad DDB Brasil made for the World Wildlife Fund in Brazil. The widely condemned ad picked up a since-stripped One Show award and also was entered in the Cannes Lions International Advertising Festival in June.

After initially lying about it, DDB Brasil now admits it created a video version of the Brazilian print ad "Tsunami," which has caused a scandal this week -- and entered both ads in the Cannes Lions International Advertising Festival in June.

Previously DDB Brasil had said the print ad ran only once in Sao Paulo and was mistakenly entered in the One Show. An agency spokeswoman said neither the agency nor the client, the World Wildlife Fund in Brazil, authorized the video version, called "Planes," that surfaced on the internet this week showing multiple planes approaching Manhattan and the World Trade Center towers.

The description of the ad submitted by the agency said "We see two airplanes blowing up the WTC's Twin Towers...lettering reminds us that the tsunami killed 100 times more people. The film asks us to respect a planet that is brutally powerful."

"When I first saw the ad I was disgusted by it," said a One Show juror who did not wish to be named and claimed to be unaware that the ad had been selected to win a Merit award. "Perhaps American judges are much more affected by this disaster than judges from other countries," the juror said, noting that ads can receive low marks from a majority of the jury and still wind up receiving an honor. "But there really is no excuse for this, and if it was created to win an award then shame on them. It really puts a dark cloud over agencies that are trying to do cut-through work for the right reasons."

The "Tsunami" ad surfaced first on the blog Ads of the World, and DDB Brasil speculated that the blogger had picked it up from the One Show site. However, Ivan Raszl, who posted the work on the blog, said he'd received it as part of a DDB press release. The work was also sent to Ad Age this week by DDB Brasil's PR department, which regularly sends new work to journalists and apparently blasted out the WWF ad by mistake.

Meanwhile, the WWF-U.S. issued yet another statement, following a joint statement yesterday by WWF in Brazil and DDB Brasil apologizing for any offense caused by the ad.

"WWF Brazil has subsequently issued statements that have raised doubts about whether the ad concept was approved at some level within the WWF Brazil organization," the WWF-U.S. statement said. "We have now relaunched a renewed inquiry into the circumstance surrounding the creation of the ad. Additionally, we are using every resource at our disposal to remove these images everywhere they exist online because they are hurtful and disrespectful to the victims of 9/11 and their families."

As far as the Cannes entry goes, this year's film jury president David Lubars said that if the ad was indeed entered in Cannes, he personally "didn't see it."

"It must've been eliminated in the very first round, which the jury president doesn't participate in," said Mr. Lubars, chairman-chief creative officer of BBDO North America. "I assume it was eliminated either because it smacked of the worst kind of fakery or just its overall disgustingness."
3 comments:

Cause mayhem in your social circle, bet your followers.

Bet Your Followers is a Twitter game to lets you gamble your followers as currency. 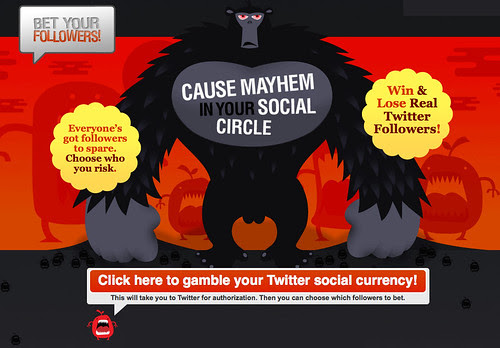 What the heck is “Bet Your Followers”?
A Twitter app that lets you wager your followers for the chance of winning more.
How do I play?

Why should I risk mine?
Everyone has someone to lose.

Who are the followers I might win?
They come from all over Twitter — maybe you'll make a new friend or two.


We're not there yet but I feel this ... has potential - maybe - all it needs is 1 main trigger and then I'd like to take on a full screen and a 40 movies concert. Groove on it. 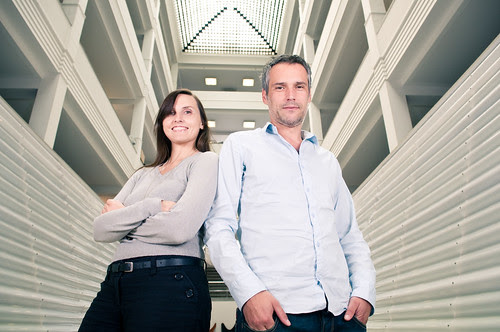 Consumers think brand, whatever the medium or the message. We blow the line. In media, thinking and titles; hence "Strative".

Only ideas are the carriers of new thoughts and can influence behaviour. Ideas originate from creative processes, not from procedures.

The creative process at Duval Guillaume is driven by brand teams and no departments.

The first medium for any brand message is digital. We believe strong brands - big or small - will have the power to be their own medium.com
2 comments: I now work at Duval Guillaume, that is as from today. Duval Guillaume is a part of the Publicis Group. I'm leaving behind a great Team at Proximity BBDO. I wrote the house a small tribute as I left the building:

The friends thou hast, and their adoption tried, Grapple them to thy soul with hoope of steel.

—
• Who is Maurice Lévy?
• Who is Andrew Robertson?

Moving e-mail permanently out of office

I have sold this (lander.janssens@proximity.bbdo.be) address to another user and will no longer use it to respond to your requests, inquiries, or nice words from now on.

Please contact me through social media, you'll easily find me by searching the web for "grapplica". Chances are I'll change my e-mail address again some day that's why I strongly recommend using social media to contact me. It seems most unlikely that I'll change nicknames anywhere soon.