Hack the Surface of the Earth 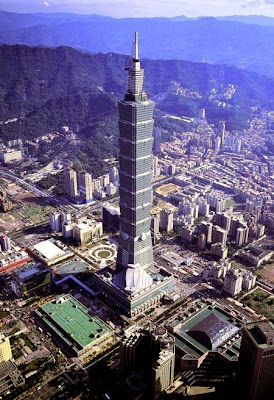 In 2005, scientists discovered that a new skyscraper in Taiwan might be causing earthquakes. Called Taipei 101, it was temporarily the tallest building in the world, before towers like the Al Burj were anything but rumors. "At more than 500 metres," we read back then, "Taipei 101 in Taiwan is the world's tallest building. But now geologists fear that its size and weight may have transformed a stable area into one susceptible to earthquake activity."

The building is so heavy, exerting such "exceptional downward stress" on the earth beneath it, that it might have "reopened" an ancient tectonic fault. If true, this discovery "may have far-reaching implications for the construction of other buildings and man-made megastructures."

At the very least, we should ask: What would happen if we built more of them? Could we build fourteen of these things in San Francisco, in an act of long-term tectonic warfare, and destroy the whole city within a decade?

Conversely, could we build just the right number of these, at just the right spots, throughout the greater Los Angeles basin and thus nail the tectonic plates in place -- weighing southern California down and zipping the San Andreas Fault up tight? It'd be seismic acupuncture, a new form of therapy against continental drift. Perhaps one gigantic tower exactly placed in outer Tokyo could make the whole Pacific Rim freeze up. That is, till a rogue group of German terrorists arrives and wreaks havoc... Directed by John McTiernan. It's geology as a military campaign, enacted through architectural design.