What I'm about to post, and did, is probably not going to make me popular with @tijs but frankly...you know. I'd like to start with introducing Tijs for a par. Although I've never met him, I can tell he's a pretty good webdesigner. With good I mean, all the designs are crisp, fresh, and layouts are 'pixelperfect' as I may say. Not to mention the solid rock of Standard CSS written. Splendid. I even follow the guy on Twitter though to me his content is a lil' off on the personal edge to be biting nail interesting. Let's skip the "he" and go for Tijs, seems to be occupied as an Interactive Strategies Manager at NOCUS for a living (or is that full-time job?). His thesis on "the influence of the mobile phone" won the IAB talent prize in 2007. At the very moment, according to his website, he's working on several projects (Twistory, Twiddict, Ttrack and some extremely secret projects that have yet to be announced).

It might backfire on me but I felt the unbearable urge to do so, so I did. And yes, I know my English sucks but bear with me... Tijs is also the administrator of a wiki called Jobzzz. And yes, I must admit, first time I found the wiki (some weeks ago) I was amused. Probably just like many other sarcastic mothers out there. Subscribing to the wikifeed I got updates as the slaughter went on. And somewhere last week it dawned on me. Some of these people that just got pregnant, bought a house or planned their holidays and now get sacked because of this damned crisis. No more sunshine over the rainbow for them I guess. I mean think about it, that list reported about 400 layoffs in total. just for the Belgian Creative and MarCom sector, in about a month... Ok ok, expected, but still. Who'd want to brag with that? 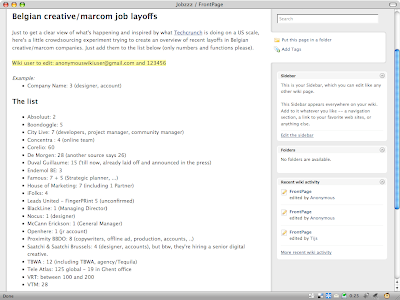 The wiki was set up "Just to get a clear view of what's happening and inspired by what Techcrunch is doing on a US scale" — "Just a little crowdsourcing experiment trying to create an overview of recent layoffs in Belgian creative/marcom companies". Hmmmn owkey, I will not focus on the word 'just' but let me emphasize the word 'overview' if I may.

The TechCrunch Layoff Tracker uses iCharts to visualize the data so it can be read out clearly. There is an overview. Not that I really justify the good means of that list but at least it's well documented, the data is processed, provided with sources and put in a nice list with the possibility to comment on what's happening. The wiki is just a loose record of 'possible' layoffs.

Anyway to cut the long story short, Tijs, I'd like to turn the wiki around. And I beg you forgive my arrogance for I already did. I've changed the Jobzzz wiki into an unofficial "looking for" message board so all these people who got laid off can start getting a new job anywhere soon.

Thank you and good luck on the new job.