The 2016 Summer Olympics will be held in Rio de Janeiro, not Chicago 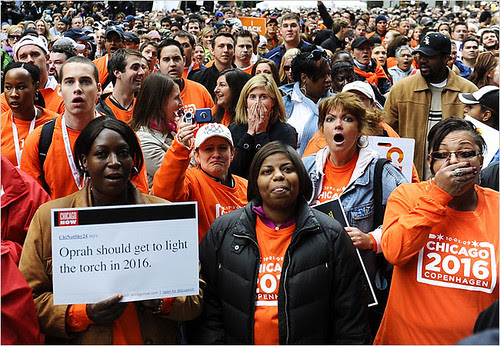 The Olympics were awarded to a South American city for the first time when the International Olympic Committee on Friday voted for Rio de Janeiro to host the 2016 Games.

Rio de Janeiro beat Madrid in the final round of voting, 66-32. The committee delivered an unexpectedly early knockout blow to Chicago, which was eliminated in the first round. Tokyo was gone in the second.

Jacques Rogge, the president of the committee, made the announcement, sending crowds in Rio de Janeiro into celebration.

The announcement was shown live on Rio’s Copacabana beach, where tens of thousands of people had begun the party early in front of a main stage flanked by screens.

As the envelope was opened in Copenhagen, a loud scream rose from the crowd. Confetti exploded from the stage, as the people, dressed in shorts and bikinis, jumped to samba music and waved Brazilian flags and balloons of green and yellow, the national colors.

The scene was different earlier in Chicago as throngs in Daley Plaza gasped in disappointment when Rogge announced that Chicago was out.