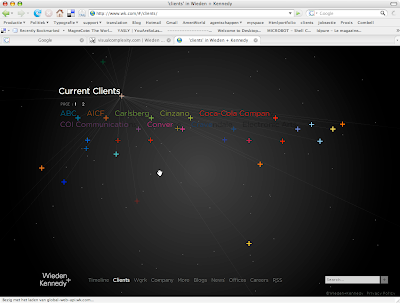 Well known for its work as a traditional agency, Wieden + Kennedy, based in Portland, Oregon, has a solid reputation largely as a result of its work over the years for key client Nike. Being one of the largest independent advertising companies in the world and best known for the Nike slogan "Just Do It", W + K list of clients include Coca-Cola, ESPN, Subaru, Avon and America Online. During the late 1990s, the agency opened a clutch of international offices but was hit by a series of staff problems, as well as fickle clients. It had recovered from these by 2002, and has steadily broadened its global reach, primarily to service Nike.

In an effort to place itself firmly on the growing club of digital agencies, and stepping away from any traditional connotation, W + K launched an innovative website to showcase their work. The whole experience is centered in a keyword navigation, either related to people, projects, clients, awards or a large set of general tags. You can do a more comprehensible filtering of the initial clutter by using the bottom navigation, although the experience of exploration, while going from one keyword to the other, as with any type of interactive semantical network, is truly worthwhile. The search functionality is also praiseworthy and quite rewarding in terms of user experience.