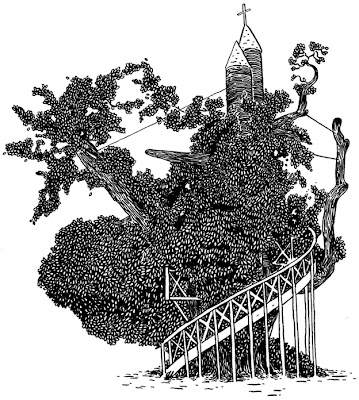 The most famous tree of France is the Chapel-Oak of Allouville-Bellefosse, a small village not far from Rouen in Normandy. In fact it is more than a tree: it is a religious monument and an object of pilgrimage. The oak itself is one of the biggest and oldest trees of France, and in it are build two small chapels above each other. Together with the large wooden staircase leading up to the chapels the whole is one of the most curious Roman Catholique sanctuaries all over Europe. About the history is known a lot: in 1669 the priest of Allouville , Abbot Du Détroit and father Du Cerceau decided to build a chapel in the already big and hollow oak, with a small altar with an image of the Virgin Mary. The chapel was dedicated to " Our Lady of Peace ". Later on a second chapel was arranged above the first and an entrance - staircase build. In it a hermit seems to have lived for some time.