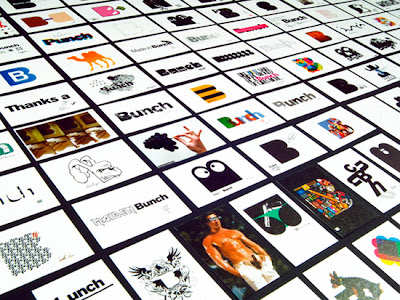 Not many design studios can boast an identity that incorporates work by Build, Carlos Segura, Paul Davies, Stefan Sagmeister James Goggin and Alexander Gelman. A design agency called Bunch, however, can. Seven months ago, Bunch approached designers and image-makers they admired and asked them to produce a “visual reaction” to it, sign it and return it. The resulting “bunchisms” (there are over 127 to date, although it is an ongoing project so more are expected) have been reproduced on business cards (shown above), on mugs, T-shirts and the company’s new letterheads and comp slips too.