Summary:
Linotype's FontExplorer X evolved from a freeware product (v1.0) to a worthy licensed product for the design and advertising industry (v2.0). This interview explains why Linotype decided to move from a free to a paid version, and lists what the improvements they've implemented to make this new version so superior.

Tobias Meyerhoff:
"FontExplorer X Pro was enhanced and improved in nearly every area." 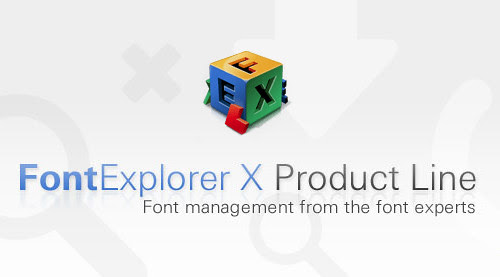 Full post:
Ever since my first visit to the TypoBerlin annual design and typography conference in 2006 I've been using Linotype's FontExplorer X to manage my font library. Without criticizing other font managing software, like Extensis' Suitcase or Apple's Font Book, I find Linotype's software by far the best in the industry. Let me tell you why.

Most importantly; it doesn't crash that often — not to say it doesn't crash! Font Book nearly screwed my last G4. And, with my last Suitcase edition it took ages to activate font-families, etc etc. In FontExplorer X, kerning is made easy as hell, an extended information palette is provided, smart sets and managing per project font-sets are quick and handy, the Linotype store is integrated (which I think was the purpose of developing this software by the way), meta-info is easily added, a decent search is implemented, it nicely stores away your fonts on your HD, backups are easily pulled, etc etc.

Brief history of Linotype
Linotype goes a long way when it comes to the history of typesetting and -casting. The founding of the company takes us back to 1886, when Ottmar Mergenthaler produces the world’s first linecasting machine in the USA. Ottmar Mergenthaler made his mark in history as the inventor of the type setting machine. Mergenthaler’s breakthrough soon became known as the Linotype. Quickly adopted by major newspapers around the world, the Linotype initiated a new freedom in the creation of everything from newspapers to books, from advertisements to a wide range of literature. Ever since the company has gradually moved into the business of fonts and type, shifting to the fast lane when taking over the type division of D. Stempel AG in 1985 and later taking over the Haas’sche type foundry, in 1989. So Linotype carries on a 120 year old heritage. Other famous names like Linotype-Hell AG, D. Stempel AG, Haas’sche Schriftgießerei and Deberny & Peignot are the roots of Linotype.

Why is FontExplorer X now a licensed product?
In other words, why was the first version freely available and is the new version to be purchased at EUR 79 (incl. VAT)?

The business of selling fonts
Shortly wrapped, Linotype is now into selling fonts and type to the people who are willing, or rather 'have', to pay for them. And thus developed a font manager that integrated their font store. Consider it iTunes for type. The first version, launched in 2005, proved to be a very good product and spread vastly amongst the designer and typeset communities. Not only because it had a good angle of functionality, but — hence the success — because it was a free product worthy of competing with the established software widely used. For example, Extensis' Suitcase.

And Linotype recently launched a new version of it's FontExplorer X. I wondered why and asked Tobias Meyerhoff, Product Manager of FontExplorerX, at the latest TypoBerlin conference.

The business of solid customer services
According to Tobias the licensed product was released partly on demand of the consumer\user. Huh? Yes well, licensed products give a mandatory support. The product gained a lot of professional and business-environment users so the demand for a guaranteed support urged Linotype to upgrade to a Pro version with added support, and features. A lot of firms and agencies don't quite trust a freeware product, so far.

FontExplorer X Pro (v2.0): new features
Linotype has worked hard to give the new version of Fontexplorer X some extra glance. • The info-pane is updated with extra kerning features that enable users to carefully kern each letter individually.
• The activation control is now upgraded to the level of auto-activation upon start-up of third party software. Formerly this was only possible through the installation of plug-ins, which weren't provided for software like Photoshop.
• The type in the WYSIWYG-fontbrowser is now adjustable in size, formerly this was only the case within the previewpane.
• Scan from document is not a new feature. It has been brought forward since most people didn’t find it in the previous versions. The feature allows to track which fonts were used in un-editable documents, for example a .pdf This new version pulls a font report to include when passing on the exported documents of typeset and artwork.

Full-featured font management capabilities, server-based
The most compelling update to the new version is the implementation of the server-based administration possibility. This server-based solution returns control of font access rights to a central administrator who can access an administration interface from any desktop client within the network. It distributes fonts and font sets over the entire network while providing users with the freedom to customize sets and preferences for their local fonts.

Related posts from others:
A list of all tweets from concerning the TypoBerlin conference this year
Tweets about the new FontExplorerX release
The official FontExplorerX Twitter-account
Raves about Linotype