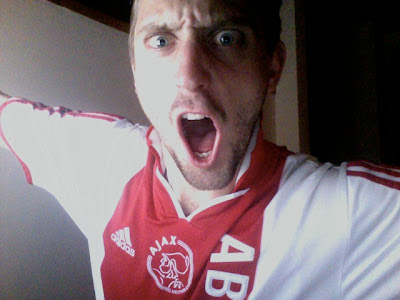 A little anecdote celebrating blogpost number 1001, ever since may 3rd 2006 the beginning of this blog, I've never posted anything about my passion for our national sport: SOCCER. As a child I was full of it, only thing I could think about was soccer, but anyway let's call it football from now on... Starting my football-career at Club Brugge K.V. and migrated to K.S.V.Jabbeke because of new team structures in the youth leagues when I was about the age of 12 (Brugge cut from 3 teams, local-district-national per age to only 2 teams district-national) I also played at K.W.S.Oudenburg and V.K.Ettelgem for just 1 year. Nothing much to be dazzled from but still.

As a kid I always got footballpresents from my dad, including an AJAX shirt! I was a major VanBasten fan.. anyway my brother in law is a huge PSV Eindhoven fan and as the Champions League season is on it's way once again I travelled to Eindhoven with him to watch them beat Marseille. Unfortunatly I mistakenly told some friends of him, diehard fans, that I have an AJAX-shirt in my closeth... frankly they all snapped berserk. And now I'm obligated to ritually burn my AJAX-shirt nex Champions League game against Liverpool F.C.