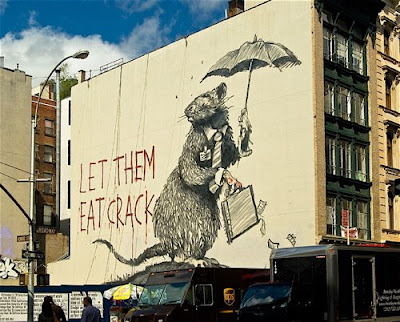 A huge Banksy mural was spotted being put up in Soho at Wooster and Grand this morning. At first it appeared that it was possibly Banksy himself painting the huge rat, but the painter's American accent quickly revealed that it was not in fact the pseudo-anonymous British graffiti artist.

After initially dodging questions, the painter revealed that he was working for the sign painting company Colossal Media and was given the commission. It's expected that the mural will be completed later today. Banksy may or may not be in town for the Lazarides show on Houston and Bowery, but it's possible he's nearby and watching the painting go up.