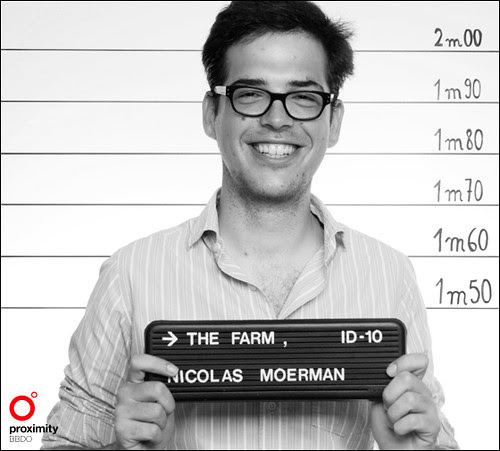 We have appointed Strategist Nicolas Moerman for the Best Of Class scholarship.

Nicolas will soon be send to The Mothership in London. After 3 weeks of learning, sharing, interacting and creating we had to elect 1 chosen one. Our first edition of The Farm ended yesterday. A series of interviews and observation sessions stacked elaborate files on each participant, which led us to a long and tiring meeting. I guess I mustn't tell you that all participants contributed the strength of the Team. But, as we promised, only one of them could be granted that €1500 lot and seat in the London office. To select the Best Of Class we considered a broad range of criteria.

Nicolas proved his strengths as a Strategist being able to shape Client input to a tight Creative Brief, he proved to be a premium Digital Native because of his thorough knowledge of technological possibilities and Social Media. He knows who to talk to. He was responsible for one third — 4950 people have visited The Farm blog since August 7 — of the platform's traffic and about one fifth of the content. One might argue that he is a noisy bastard — and he is — but luckily he has learned to keep quiet when needed. We don't blame him for his youthful enthusiasm of course. He is able to jump-start the creative process and mostly assesses good ideas correctly. Overall he is fascinated by marketing, technology and advertising which, we believe, is a good mix. Nicolas has a natural appetite for selling products and services the new media way.

He considers himself to have weird sense of humor and is without any doubt a major a geek. A marketing addict, bitten by the interactive advertising bug. No doubt he'll blend into the British Empire squad in no time. We wish him all the luck, and Godspeed.