The Map of Science 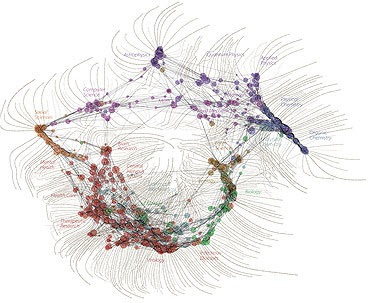 Who doesn't love a good data visualization?
From the writeup found on Seed:
This map was constructed by sorting roughly 800,000 published papers into 776 different scientific paradigms (shown as pale circular nodes) based on how often the papers were cited together by authors of other papers. Links (curved black lines) were made between the paradigms that shared papers, then treated as rubber bands, holding similar paradigms nearer one another when a physical simulation forced every paradigm to repel every other; thus the layout derives directly from the data.