The Strenghts of Nations 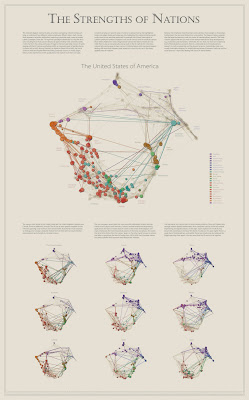 In this impressive poster developed by Dick Klavans and Bradford Paley, with the help of Kevin Boyack and ISI data, one can see the variations in how different nations pursue science. The concept is not only ingenious but also takes full advantage of the page layout where it's quite easy to make sensible comparisons between the nations placed side-by-side.

Some patterns immediately arise. The nations most similar to the United States (portrayed in the image) are the UK, Australia and Canada. However, the UK has a greater emphasis on the network spanning social sciences and mental health. Australia has more emphasis on biology, and Canada is relatively distinct from all three with its broad interdisciplinary pattern and strength in computer science. The two European nations with the most scientific publications (France and Germany) excel in physics and chemistry. France's network emphasizes engineering applications. Germany emphasizes the more theoretical aspects of chemistry and physics. Spain on the other hand, focuses on science that links to agriculture. The two pacific rim nations with the most similar profile are China and Taiwan. Both strongly address applied mathematics: from computer science towards engineering and applied physics. Japan explore more the medical areas and physical chemistry.