But on the other hand the toolspalette and other palettes are superbly-integrated and easy to use, a refined design is at order (transaprancy, finesse, ... ;) ) And it uses collapse-able toolbars and boxes (like in CS2s InDesign, and that's really really awesome) Owh yeah, and these toolboxes also, STICK TOGHETER, no no more resizing every palette seperatly, yeui 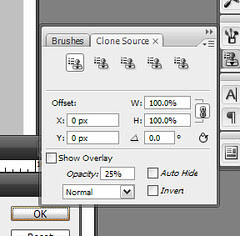 Some others have been taking screenshots as well.. guess a lot of users have been awaiting finger-itching for this new cs3. Tlking 'bout branding and especially HYPE :)

I allready notified Adobe on a Javascript error in the Bridge (when going up and down different folder use apple+arrowkeys) and some plug-in errors, but i guess that's because of better new features.