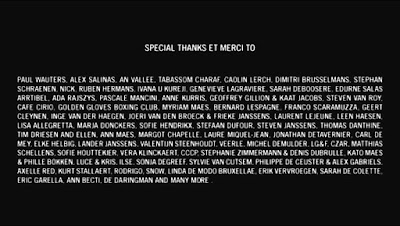 For all fevers there's a cure, but I still haven't one that cures mine. But hey it's wintertime so.. whatever. Busy busy busy finishing some larger corporate projects and heavely engaging a pitch (can't tell you which one though) Be little patient..

"De Sint" was greatfull on tuesday, I won an i-Pod at the latest Shapeshifters-event, jeuyie i guess. Jon Wozencroft, who smokes golden Bensons like I used to, held a very rare lecture. Talking more in philosophical terms on about the greater positioning of design and it's burst in the 90s (still bursting on btw) Anyway he's the founder of TOUCH, a recordlabel company. He's also a teacher at the Royal College of Arts in London. He wondered why many graphic designers ask themselfs "what is graphic design" while it is unneaded to create again this box of a medium that has finally been a bit liberated. But on the contrare he also points out that this so loud and shouted form of creation has narrowed itself to be caught in a tight realm of no-movement because it is oftenly led by the limitations of software and technology.

Why is it that, mostly, young graphic designer are given the fealing that they're not designing 'the right way' when they're not on or at the computer. Handcraft is still the most pure and human way of designing... Toss your mind a bit on that while surfing on wild.

» THIS is a good spot to oftenly check updates on the work produced by SNOW.

To view our latest release, click here (design by Elke)