Looks like the only thing I do here at snow is having fun and blogging huh, well that's not really the case. Last few months I've been working my ass off :) but with pleasure. 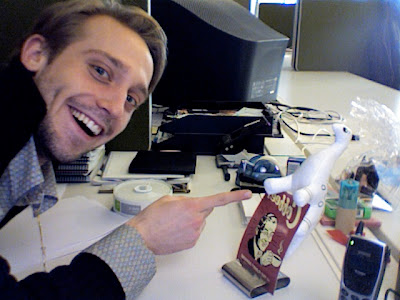 In august i started with the design of LG&F Amsterdam, parallel the Bacardi-Martini website was initiated and will be live in a few days/weeks. It's tweaked for finishing as we speak. That was my largest project for now, so m very excited about this...
—
The at the dawn of september came my first bannerdesign, to be honest I HATE BANNERS but there's a underestimated creative challenge in each one of them (well at least if you're given a bit of space to play around, which is most oftenly not the case) Toyota, who recently left LG&F was commisoner giver on this assignment.
—
I also did the restyling of the Klara e-mail. At a certain point at that time i was almost the housing-designer of Klara with the production of several banners and internal blogs. But due to a lack of budget and open communication both parties were oftenly rushed and trapped into frustration. Our personal relation is on a hold for the moment but their marriage with our AD's Tom and Iwein is still standing strong with the latest KlaraInHetPaleis tv-commercials and billboards.
—
In line with the existing site, i designed a blog for Campral. Alcoholic-related articles are posted there.
—
Additional to that Brussels Airlines needed a whole lot of banners which as junior was contributed to me for carefull handling. This subject handles sales and nothing but sales, yet it learned me a lot — not an a creative level but — how to act 'pragmatic' » very important to get along the advertising-world. Besides that there were a load of banners for Radio Donna, Essent, AxaBank, Oxfam,
—
There was a an off track project for a new advertising agency called Troie but i wish to lay down all comments on this subject, with no further to do.
—
My activities concerned a few pitches for clients as 'AgentschapEconomie' (governmental agency to give new economic impulses) - still running /+/ Toyota but online activities moved along with the above advertising /+/ RTFB /+/ Ecolo - still running
—
I designed our Agencies current html-website. That was fun, the shortest and most clear briefing ever stated: "grab me by the balls and think minmal visualizing a desert of snow"
—
What really pleased me was the redesign for Hebbes.be. It is in production now and will be finished within a month or so, untill then please go have a look at the current website. You'll (i know i was) feel very agitated using the site, this is something they were very aware of at Hebbes and so they called our agency to tweak the usability and obviously do a total make-over of the design... [so check hebbes soon, to see belgiums newest knockout classified-site ;) ]
—
At the moment I'm rolling my eyes over an internal Proximusproject. And our friends in Holland have just released their newest (small) online-teasing-application for the new season of VanSpeijk. I had a very good time designing this project.
—
So far for the annual report.