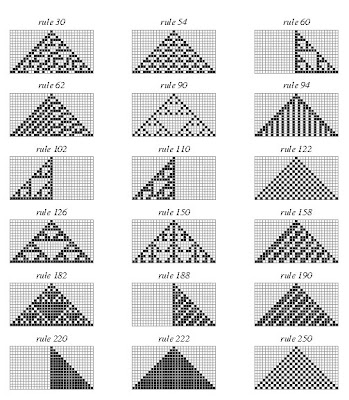 On the frontier of complexity science since he was a boy, Stephen Wolfram is a champion of cellular automata, 256 "programs" governed by simple nonmathematical rules. He points out that even the most complex equations fail to accurately model biological systems, but the simplest cellular automata can produce results straight out of nature: tree branches, stream eddies, and leopard spots, for instance.

A scientific prodigy who earned a doctorate from Caltech at age 20, Wolfram became a Nobel-caliber researcher in the emerging field of complexity shortly thereafter only to abscond from academe and establish his own software company. In secrecy, for over ten years, he experimented with computer graphics called cellular automata, which produce shaded images on grid patterns according to programmatic rules (973 images are reproduced here). Wolfram went on to discover that the same vastly complex images could be produced by even very simple sets of rules and argues here that dynamic and complex systems throughout nature are triggered by simple programs.

Read more about it here