Yesterday I went to one of those memorial Broadway-shows, not really my kind of entertainment but still impressive and relaxing while enjoying the excitement of the show.

Broadway theatre
Commonly called simply Broadway, refers to theatrical performances presented in one of the 39 large professional theatres with 500 seats or more located in the Theatre District of the New York City borough of Manhattan. Broadway theatre is the best known form of professional theatre to the general public in the United States and the most lucrative for the performers, technicians and others involved in putting on the shows. Along with London's West End theatre, Broadway theatre is usually considered to represent the highest level of commercial theatre in the English-speaking world.

The shows that reach Broadway and thrive there have historically been perceived as generally mainstream and less likely to be cutting edge than some produced Off- and Off-Off-Broadway or in regional non-profit theatres.

The Broadway theatre district is a key tourist attraction in New York City. According to The Broadway League, Broadway shows sell over one and a half billion dollars worth of tickets annually. 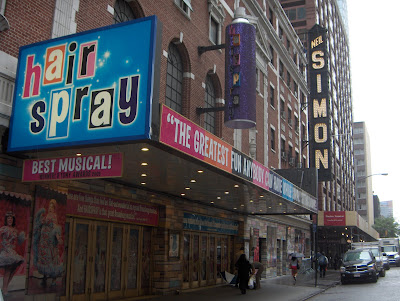 The Neil Simon Theatre is a Broadway theatre located at 250 West 52nd Street in midtown-Manhattan.

Designed by architect Herbert J. Krapp, the theatre was built by producers Alex Aarons and Vinton Freedley, who combined their first names to christen it the Alvin Theatre. It opened on November 22, 1927 with George and Ira Gershwin's Funny Face starring Fred and Adele Astaire.

Due to the Great Depression, Aarons and Freedley lost control of their venue in 1932. For a period of time it was used as a radio studio by CBS.

In 1977, the building was purchased by the Nederlander Organization, and was renamed in honor of American playwright Simon in 1983 with the opening of Brighton Beach Memoirs.

The building was designated a New York City landmark in 1985. At present it has a seating capacity of approximately 1400. 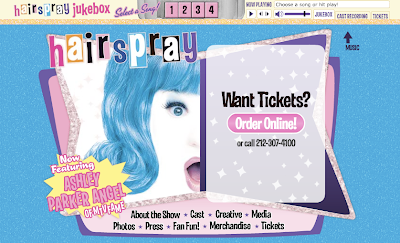 Hairspray is a musical with music by Marc Shaiman, lyrics by Scott Wittman and Shaiman and a book by Mark O'Donnell and Thomas Meehan, based on the 1988 John Waters movie Hairspray. The songs include 1960s-style dance music and "downtown" rhythm and blues. In 1962 Baltimore, Maryland, plump teenager Tracy Turnblad's dream is to dance on The Corny Collins Show, a local TV dance program based on the real-life Buddy Deane Show. When Tracy wins a role on the show, she becomes a celebrity overnight. She then launches a campaign to racially integrate the show. ‘’Hairspray’’ is a social commentary on the injustices of parts of American society in the 1960s.

The musical's original Broadway production opened in 2002 and won eight Tony Awards out of thirteen nominations. As of April 2008, it has played for over 2,300 performances. Hairspray has also enjoyed U.S. national tours and numerous foreign productions and was adapted for a 2007 musical film. The London West End production was nominated for a record-setting eleven Laurence Olivier Awards, winning for Best New Musical and in three other categories.