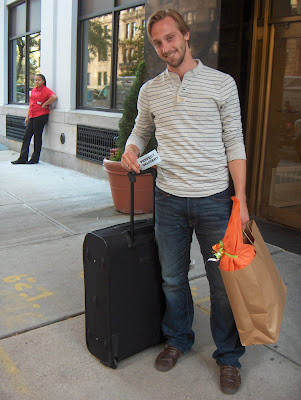 So, A long but serious series of USA today posts about me in the States for the first time this year. And let me start with a negative vibe so that it can only get better.

The Delta-website:
The website I'd like to talk about in the first place. I ordered my tickets online as I usually do, or rather I tried to order! Come again, tried? Yes, I never ever had this before but you know shit happens. The first time I did the purchase order online the end of the website prompt me an error at the end of the process saying something like "we are experiencing difficulties processing the purchase of your tickets... Please call Delta Reservation Sales within 24 hours... Your reference number is..." I called and the order didn't get through he clerk told me to do the online process again. The payement for the "cancellation-insurance" did get through! So I had to call some other agency who was in charge for that to get my money back, Delta didn't do that for me. Luckily with a very long call and e-mail they paid me back. So off purchasing the tickets online again and guess what, uhu same shit over again, but this time when I called they told me the payement did get through although the website prompted otherwise. Anyway after few days the confirmation e-mail still hadn't arrived in my inbox neither did it show up in my long list of junk-mails. So I called Delta again and they told me I had to be patient...the day after that I suddenly did get the confirmation e-mail. Done and done!

Why did I go anyway?
Well on a dark winternight when I was sitting drinking with my family for special occasion I was teasing my sister a little bit challenging her to a deal. If she'd pass all her exams and score a 12/20 or more on every exam I'd be paying her first trip to the States, the big apple. Unfortunately my sister had a rare problem with her stomach and had to stay in Belgium for safety, which leads us to the next issue I had with Delta Airlines.

Rebooking a Delta-ticket:
So, the second ticket was on my sisters name. But now she couldn't join me for health matters, so I wanted to take my girlfriend with me using the same ticket which is basically impossible with every airline. I'm forgetting a small part of the story here: I went to the bank a week after I booked my tickets, and before I knew me sister wasn't coming along for the flight. I told my bank I wanted a cancellation-insurance just in case because I didn't take that along with the tickets online because I had these issues the first purchasing them the time, remember (view first lines) The bank told me that you have to purchase a cancellation-insurance within 3 days after purchasing the tickets, but since the confirmation of the tickets came more then 10 days after the purchase-order I placed online that was a bit a grey area... So no cancellation-insurance, but when my sister got sick that started to be an issue. Delta off course told me that I had to purchase a whole new ticket for my girlfriend, without refund for the ticket under the name of my sister. All that because I didn't have a cancellation-insurance on the tickets. So, new purchase!

The Delta-plane:
I flew in to New York on a Delta Airlines plane. Nice and cozy but a little small, especially because the plane-illustration I appointed my seats on online promised a jumbo-jet size model, one with a middle row and mostly larger and more comfortable seats. But anyway, the space was quite ok. And oh yeah, they hàd Canada Dry but the steward was to laizy to get it for me because it was in the back of the tray, she gave me a Schweppes instead which was foutainwater compared to the ginger ale you get from a Canada, but hey I wasn't complaining I was happy with the drink.

Delta Baggage-claim:
Yeah, last but certainly not least. Arriving at JFK; reminding you to the fact that one is in the plane for over 8 hours, queuing for another hour to get passed the security, being looked as if you are the worlds biggest terrorist — arriving in the hall where baggage is dropped and picked up, it was a mess. a total chaos beyond your wildest dreams when it comes to picked up luggage, off course Delta has nothing to do with this little first part of the story but still. There were bags all over the place, my little, medium or big black bag was lying there gently alongside the many others who looked exactly the same. And oh yeah, mine was gone, not that I couldn't fnd it or didn't look good enough, nope...it was gone. After waiting another hour it was clear to me that it was gone, my guess was that somebody else took it by mistake but who knows. So I reported my baggage reference number at the delta baggage-claim and took a cab downtown. Now here comes the very short version of calling over 4 times a day for over 4 days, hearing a different story each time a clerk of Delta answered the phone, having no information on my bag what-so-ever. First the story was: "the bag probably wasn't scanned", then it was "on it's way to the airport from Brussels", later they weren't able to locate it at all.. jadidadaaaadadaa. Afterall it was delivered to me on monday, at the a friend of mines' place because he had a doorman and Delta couldn't give me exact detail on which delivery-service firm was gonna deliver it, neither did they know when it was going to be delivered so I was supposed to sit down and wait for it to arrive! And oh, off course I bought some clothes while I was waiting for my bag to arrive, therefor I e-mailed Delta who replied me that they were "sorry to learn about the circumstances you described" and that they would "consider reimbursement for any reasonable out-of-pocket expenses you may have incurred during the delay of your luggage. When a passenger's baggage is delayed for 24 hours, we begin considering out-of-pocket expenses at the rate of $25.00 per day, per person up to a maximum of $125.00 when baggage is delayed for five days" I asked them what they would buy with $25 in a city like New York, being a foreigner.

Still I love America, the land where every long coffee is way too long and opportunity is everywhere if you know where to look and your father has some good connections and a fare amount of money stacked in the bank, the maffia will work as well.