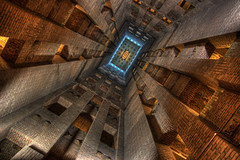 Into The Blue
Originally uploaded by (Erik).

This is a view up the more than 60 meter high tower of De Inktpot. The ceiling your are looking up to is at 45 meters. The upper part of the tower is a water reservoir. The inktpot is build between 1918 and 1922 using 20.000.000 bricks. The building is designed by G.W. van Heukelom for the Dutch Railways. The blue light in the top is daylight shinning through blue windows. All the other light is artificial.

Normally you cannot enter the building, but today it was Open Monumentendag and ProRail, the current owner of the building opened the doors for the public. So, I brought my tripod and positioned myself in the middle of the hall. While I was on my knees preparing this shot about 50 or more people were gathering around me. Not to see what I was doing, but the hall was also the starting point of the guided excursions that were given today.