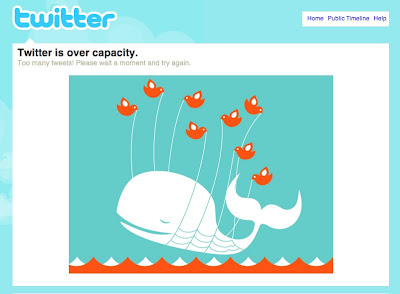 2. Twitter - The Popularization of the Fail Whale
...the popular microblogging site had more and more sightings of the infamous Fail Whale, resulting in the Fail Whale fan club, merchandise, and even a Twitter account.

3. Amazon S3 Outtage
...one of Amazon’s three geographic locations went down for a few of hours, killing the Amazon S3, the cloud storage system. Many web startups like Twitter, SmugMug, and even the New York Times had error messages up.

4. Cuil’s Sub-par Launch
...launch proved to be a huge disappointment. The search results weren’t even close to Google’s relevancy, and their indexing bot was crashing websites.

6. Digg Scripts
...some of its top users (and many others) were banned throughout 2008 for using scripts to automatically vote on their friend’s submissions.

7. 30 Hours of Gmail Dowtime
...many of the people affected were small businesses who weren’t able to access their email for over 24 hours, losing profits in the process.

8. MobileMe’s Awful Launch
the first day of the launch was filled with slow performance and downtime, weird problems like random user logouts, and the nail in the coffin: The service couldn’t sync with calendars and contact entries for the entire first day.

9. Onslaught of Twitter Clones
...many Twitter clones have sprung up the past year, and nearly all of them lack any differentiation from Twitter, it’s highly unlikely that the clone will find any traction at all.

10. Ecommerce Sites Down On Black Friday
...a flood of people flock to your site begging to spend large amounts of money, and your site is down. Many of the major sites like Amazon, Sears and Live Cashback were all brought to their knees, forcing shoppers to go elsewhere for their Black Friday shopping.