Innovative Media Strategy:
The internet is a medium that by definition is made by the people that our on it. Now more than ever in this web 2.0 era. They create content, they send it to friends, they bring social platforms to life. With this campaign Belgacom puts those people into the spotlight by making them own the internet and by giving them national exposure for it in different media: guerilla in the streets, on the net, on the publicity screens alongside the football fields in the premier league, on national TV. Thanks to the broad use of different online and offline media, Belgacom proved that the internet indeed belongs to everybody and positioned itself as the authority in the internet market.

Creative Execution:
There first was a teasing phase with guerilla postering and stickering to launch and create rumor around the url. The campaign was picked up by different blogs and the internet ‘incrowd’. The next step consisted of banners, emails and a M-G-M campaign to bring people to the website. Then the winners got national exposure in on and offline media. Their faces appeared in personalised banners, during premier league football matches, on national TV, in the streets.. Which created an enormous snowball effect on the site. Later on user generated content on e-bay, facebook etc and PR in the press added to the success of the viral campaign and of the promotional campaign website.

Effectiveness:
In only one week, over 100.000 Belgians visited the site: that’s one out of every hundred Belgians. After four weeks this number rose to an amazing 800.000 visits. People madly clicked 24/7, with rates still at one click per second between 3 and 4 am. The average visit time was over 5 minutes. Not bad for a site with only one button to click. * Visits: 802.715 * Unique visitors: 211.067 * Average visit time: over 5 minutes * Participants: 82.500 people participated in the contest * 1 in 2 site visitors shared the experience adding to the viral effect 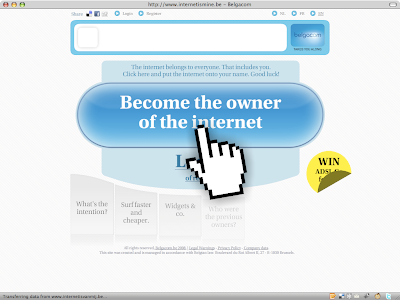 Become the owner of the internet
The internet belongs to everyone. That includes you. Click here and claim the internet. Good luck!

But beware, you only get 10 clicks a day!
Invite your friends and increase your chances. For each friend that registers you get one extra click to play.

Each owner is entitled to his certificate of ownership.

Your hour of glory
Have you been the owner of the internet the longest during one hour?
Then you get your name and picture put up in our live banners all over the internet

You can check the hourly stats — live updated — to see when best to click, the daily stats to see which day is busiest. There's a gallery to see who were the previous owners, who are the internet bigwigs and check out your personal ranking.

Additionally there's a series of viral tools. You can find owners of the internet all around on Facebook-fanpages or groups and on Netlog.

Internet is mine
2 times silver at Eurobest 2008, Cat.: Use of Mixed Media and Products & Services

And many thanks to Geert Leysen, Kadima Muela, Pascal Vandendriessche, Bart Muskala, Armand Mostin, Franky Willekens, Nathalie Willems, and so many others I'm likely forgetting...