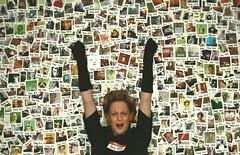 One year ago, (after two weeks of weighing the pros and cons), I decided to start the 366days project for two reasons. The first reason had to do with all of the sudden changes in my life. I was newly single, in a new town with a new job, and I knew this would be an awesome year to document. Since Day 1, my intended "audience" has been myself in ten years. I have taken the photos I want to show my 50 year old self.

The second reason that I started the project was to get more comfortable behind the camera. Now that the year has passed, I honestly don't know if I'm a better photographer...but I am confident in the fact that I'm a better photo "styler". I still don't know much about my camera and it's settings, but I think I am better at composing shots.

From my best count, two of my photos are naked, 23 were taken at The Knitting Nest, 37 were with my camera phone, 56 show yarn or handknits, and SIXTY-TWO photos include at least one dog.