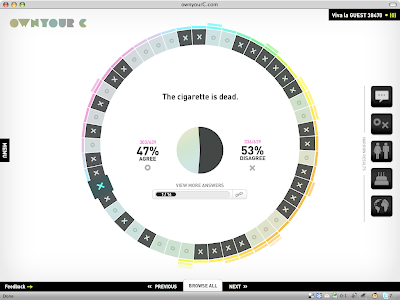 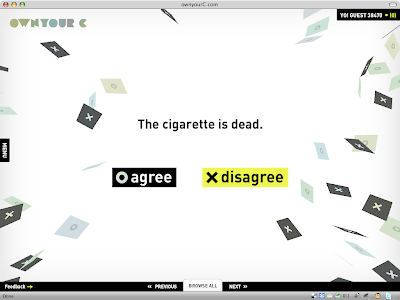 The Challenge:
In 2008, Cactus Marketing engaged AgencyNet seeking to re-invent and re-launch the highly successful and awarded “Own Your C” smoking cessation campaign originally launched by the two agencies in 2006.

Based on the premise that no teen wants to be told not to smoke, our challenge was to empower teens to take charge of their own choices, ultimately making smarter, healthier decisions in everything they do.

The Solution:
It’s no secret that teens are spending their time online. More and more each day, teens are online sharing emotions— posting videos, photos, and comments— for the whole world to see. In turn, they expect feedback, opinions, and a dialogue. They want their 15 minutes of fame and, increasingly, they’re getting it online.

Knowing this, our solution was to empower teens to take ownership of their choices and give them what they want most— a soapbox to express themselves. The new Own Your C 2.0 is a rich online community that allows teens to share their opinions about the choices they face each and every day. From smoking, to fast food, to the existence of UFOs, every choice in this community matters. The result is a hotbed of debate, individuality, and self-expression that truly leverages the power of peers to influence behavior and decision-making. Choices can be expressed via text, photo, image or video – empowering a highly customized interaction within the community. An elaborate filtering system allows teens to view responses in a way that is most meaningful to them, whether by age, gender, response, or location.

The new ownyourC.com has now been awarded FWA “Site of the Day.”

The fully integrated campaign also includes a series of 15-second TV Spots, Online Rich Media Banners, and Live Events, inviting teens to participate in the new Own Your C 2.0 community and building on the website’s premise to “Connect, Influence, and Share.”

Production Highlights:
Prior to production, rapid prototypes were created to ensure that the front-end system would be able to render large amounts of dynamic data without overly taxing computer processors. Throughout the production of the site, animations were monitored and optimized to ensure that users could view the unique Papervision 3D experience without encountering adverse performance issues.

Software/ Technology/ Platforms:
The OwnYourC website takes advantage of the latest technologies in order to provide the community with the most robust and user-friendly experience possible.


Front-end was developed using Flash 9 and Papervision for the streamlined rendering of 3-D objects
Adobe Flex was used for all Action Scripting
The backend Content Management System and databases were developed in ASP.NET 3.5 on a Windows Server Platform
Panda Stream, recently released open-source software, was used to enable the uploading, encoding and streaming of videos
Amazon Web Services was used for media storage and delivery of content
'From the start, the Own Your C campaign has been about helping teens to understand that the choices they make truly define and shape who they are. The new OwnYourC.com takes that thought, couples it with teens’ natural tendency to socialize and communicate on the web, and offers a constructive forum for teens to share their stories about the choices they face every day. It’s a great place to connect and ultimately to realize that whatever you’re facing, you’re not alone.’
-Alex Morrison
VP Consumer and Brand Strategy
AgencyNet Interactive

‘The new ownyourC.com is built on Flash technology and Papervision, which have rarely been used in the development of Web 2.0 applications, and offer users a visually immersive experience. Slick transitions and ambient, 3D animations make the site feel alive—you can really feel the sense of activity and connection. Add in a robust community that powers the site, and ownyourC.com really is a great place for teens to Connect, Share and Influence.’
-Pierre Kremer
Senior Project Manager
AgencyNet Interactive

AgencyNet has been named “one of the hottest digital agencies around” by Advertising Age and our work has been the recipient of over 125 high-profile awards including an Interactive Emmy, FWA Top 20 agency sites in history, Cannes Lion, Web Marketing Association’s Best Interactive Service Web Site, South by Southwest’s Best in Show, as well as The Webby.

Over the last 14 years we have developed robust Brand Portals, ideated successful Buzz Generation Campaigns, created ubiquitous Digital Content, and served as a strategic consulting partner to some of the world’s most recognized and respected brands including Bacardi, Warner Bros, Ford, Sony, Howard Stern, Bill Clinton, and many others.