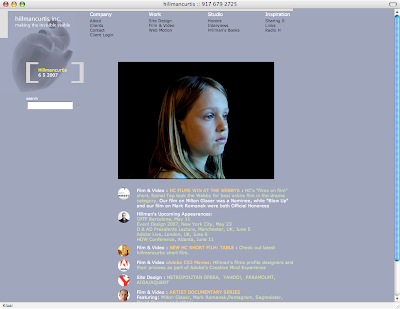 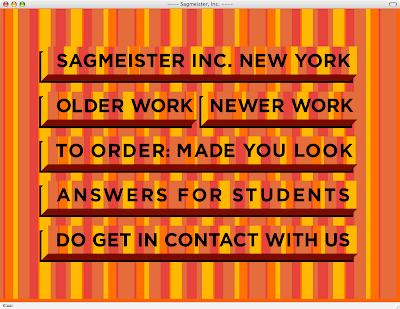 First bad news is that Sagmeister couldn't make it, bohoee... There was a video-message as an opener for the festival. Well, the thing i remembered from the talk was "worrying solves less". (and aw my ears, they should silence the audio... I've you've read MTIV you can figure a bit the mind of Curtis, he just got off the plain and dropped some acid so, i guess that brakes the ice. He works in SaFran for the moment. He writes books, designes websites and make films.
Hillman is the designer of the YAHOO! homepage, the MetOPera, the Adobe housingstyle 2 editions back
Curtis is here to talk about movies, he doesn't consider himself as a minimalist designer, but yet everything has to be there and do something. Movies are more overall his experimenting.
Started with: creating short films for the web, which is the title of his new book. Rememeber his portret-project, he shot all people who came into his studio and filmed them just blinkcing their eyes.

Project: Artist series
Stefan Sagmeister lives 7 blocks away from Hillman and they were on a shortfilm-travel to Texas. But within this project he also did, Paula Scher, James Victore, Milton Glaser, David Carson, Pentagram and Mark Romanek.
Herefor he'd never bring a list of questions, the meaning was to document the interaction, between, and the conversation.. And they couldn't exceed 7 minutes because it has to be compelling enough to play on the web and people there are on the move, litterally, with the mentals...
The project was meant to celebrate the work of someone that influenced him, but also because the camera gives instant access to the person, of who they are and how they work.
* And guess what; UDP status:Good remote: » perfect Skype webcam connection. if that ain't rock'n'roll. Wanna follow the OFFF on a distance? Skype me, and I'll give you a live few minutes of your fav-speaker :)