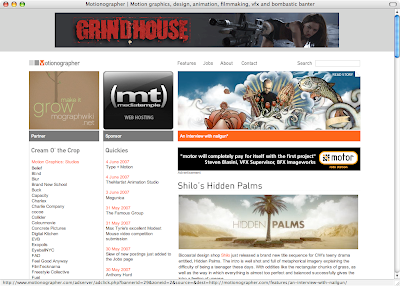 A curatorial space... If its' not online it's hard to get inspired by. There's a whole lot on motiongraphics, at mographwiki. There are a lot interviews and links at motionographer, so do go check it out. The first incarnation of motionographer was Tween, by Justin Cone. Motionographer doesn't make motiongraphics but it publishes, only, it's a platform. 20 to 30K visits a day! (rss feeds axcluded) the curatorial role is where the core of motionographer is. But most important is; what is motiongraphics? A mixture of animation, design and visual effects. An important trend is that print is slowly overtaken by motiongraphics. Time sugggests narrative, narrative suggests persuasive.. and it is the most relevant medium at the moment. Justin did some motiongraphics for Creative Commons » you're building the past right now. He sees it as visuals essays, with the goal of letting people know what it is and raise the interest to go and check it out, there's a lot of stuff there » check this, "Next industrial revolution"

Talking about the importance of filtering, filtering impulses on the street, message that flood the mind daily, and narrative is a key to stick into the filter of most minds because basically you're telling a story. Always trying to get to the heart , the essence compiling as short as possible because most work is intended to play on USA channel (max30sec) and again the imhttp://www.blogger.com/img/gl.link.gifportance is the narrative. But at first it was meant to be only for the web, later on for nightbroadcast in the end it played at 9 o'clock in the morning, so scripts had to be rewritten, a lot.
Working for TvLand » all designed to create an emotional response.
And on » lateron changed names, a marketingcampagne for XionXB car...
The tower of Granville is a fantastic animation by them.They are also the motiongraphers of the animation in "An Inconvenient truth".

» Extra RE*NASCENT was here as well! and we did a movie with 3D glasses == cool! yeah ;p It was the Re:fresh OFFFestival presentation.