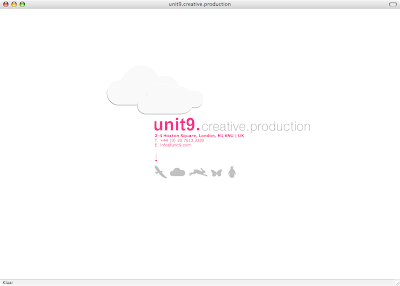 Trying to get emotion into the content. In recent projects they'll focus on the process of the work.
Adobe: The Creative Mind (with Goodby and Silverstein, where Adobe is client)
» It's all about being inside the creators mind... talking to designers which allowed the navigation to go more experimental and get away from the obvious. It's about getting ionto a mental space, an amorfous site. Thrying to storytell how a creative process can be formed, but translated into a feeling you get by browsing the site and still give the content about the product a platform to present itself. The monkey is the main character (also t-shirts are maid of this host-character) He's a main navigational element, he's let's say the help-character » the backbutton. A moodboard was madup to capture the possible mind of the targetted audience. But off course a thourough testing for clarity was necessary/essential. The storytelling is only later-on merged with the overall interaction, and also there's a lot of randomstates added to the project. But the most important aspect was the linearity of the whole story. Not to forget the importance of the sound.
Foster Farms
At first the chicken-puppets from the commercials had to be used but that would never get as far as the impact of the puppets in tv. So they decided to construct them in 3D (using Maya fur-package). Trying to get the same feel of them, they were struggling to get them resemble the same but first setting them into motion with simple models. The idea is the chickens are trying to get into the farm, but the secret is they never will. an oldskool game amuses the audience but the chicken gets fat and goes down.
V-festival (Virgin mobile festival)
The idea was to get it audience on the site long enough to get the commercial message (hey it's aVirgin mobile festival site) because most people play the game and stop after having some fun... Go there and type PICKLE, it's a hack you'll get some extra's.