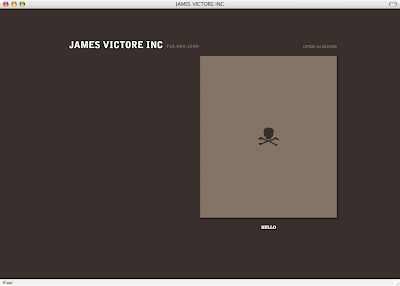 Starting of handing out stickers that read "advertisers think you're stupid". Then talking mostly on what he is known for, posterdesign and soem of his projects working on surfboards. Furthermore a very funny but yet good speaker, teaching graphic design next to his work as a designer.
James Victore Inc is an independent design studio hell-bent on world domination. We strive to make work that is sexy, strong and memorable.
James Victore is the most furious designer of his generation; his work is extremely crude and direct, and he never has problems to raise uncomfortable questions. He likes provocation enough to often declare that graphic design is not too interesting, although his work is one of the best arguments against this. In his covers, illustrations and posters, Victore make a direct call for us to take a position and do something for the most basic political and social conflicts. His presence is an appeal to the power of visual communication, and one ofthe greatest surprises of OFFF07.