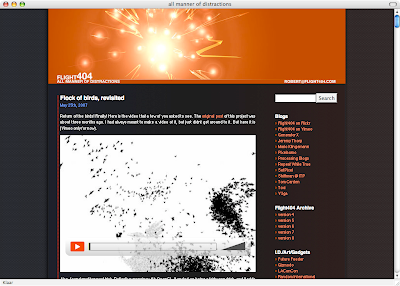 Robert Hodgin is a co-founder and executive creative director at The Barbarian Group. Prior to joining The Barbarian Group, Robert worked as a freelance designer, and before that held positions at Arnold Worldwide and Circle.com.
Since co-founding The Barbarian Group. Robert has focused on pushing the limits of motion-intensive interactive sites. He was the creative force behind some of The Barbarian Group most visually compelling sites, and serves as creative mentor for the Boston office. He keeps an eye on creative production in Boston and New York, in conjunction with Keith, and has been delving deep into processing and java-based programming of late. Robert is also the creative force and programmer behind flight404.com - an interactive, experimental Flash site.
Cooperating with the The Barbarian Group, they started of with a small company in Boston but are spread thoughout in NYC and recently opened in SanFrancisco last week. Influenced by Sachiko Kodama, in looking for magnetism in processing. He designed a lot of cool projects in processing, investigating flocks and particle-movements. Focussing on picking the colorsets carefully and not letting maths take care of the picking. Check www.inthemod.com, but all this is "just in the frame of experimenting".
Magnetosphere is his most famous and coolest project, digg his blog for more. This shit is SUPERHOT!!