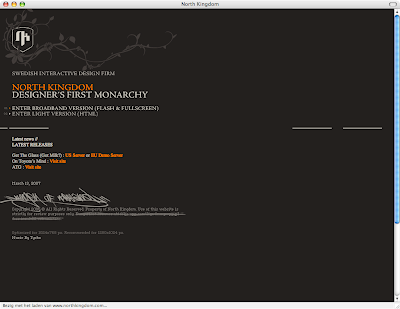 Founded in 2003, they started off with a Company presentation... Now they are working from in Stockholm. PASSION is there corebusiness, focussing on details - bieng satisfied with only perfectly finished projects, but having fun is big part of the deal too. Anyway they're working a lot for ABSOLUT vodka and Vodafone, they're the creators of that fantastic Toyota minisite, the Aygo decompile minisite, and the Get the glass - game, I allready posted on "Get the glass".
About Get the Glass, they were mostly inppired by the Stella Artois vault game, which was a blistering good onlline-advertising application. With this project they wanted to step away from telling a story nor getting another online tour. Anyway they created the idea of a boardgame and give the message thru the boardgame. (Creative directors and leading people within most advertising agencies are outdated and totally unaware of what is alive online so you can figure it was allready a backbraker to sell this idea to them in the first place). In this case they worked simultaneously with several designers, sending it back-and-forth, a workflow most advertising agencies lack to do, unfortunatly. Ad-agencies will have to change there point of viewing; f.e. they are used to work a copywriter and an art director into a team but they'd never let designers come and go in teamformation..and that's just — stupid. Companies are not fully (enough) integrated yet. For example, the casting of the castle for this project was a jail but the shooting was allready done simultaneously with the modelling of the boardgame... and they didn't match. And as always the modelling guy had to build a new fort overnight.
get the glass was treated as a fully new brand boxcard game for making the game more powefull, a logo the cards, the box itself, characters, the playground - facing the limitations with pattents of PIXAR and such companies, animating the characters, making the real modell into a filmed motion and 3D animation, sequenced into an online application-game that still runs on a standard/modest computer.
» an monstorous but amazing post-production marathon was added to compile the game in the end.

Jorge Calleja is focussing not only on how to work interactive projects but also how to think interactive. He agrees that advertising agencies should credit the designers who actually accomplished the work. Now he's working Goodby & Silverstein and e's convinced that they are the new breath of what modern webvertising is going to be. Remembering that there is always someone better than you, and also that there is no such thing as a group, you're always fighting eachother to get credited yourself but within that lies freedom - but off course how much time of your life and passion are you willing to invest in advertising world. Advertising, broadcast and interactive is leading the new world order within Graphic Design, therefor Sweden is the new leader and that's why they moved there Hyperisland contributes a great deal in this evolution.