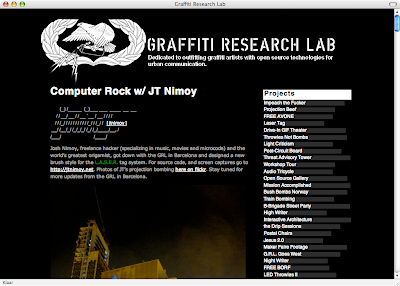 They started off in a coding and hardware lab, everything they do is free to use for everything and everyone. They were worked into the hacker-community. With the high interest in technology and both graffiti (or anything that happens in the public sphere without permission) so that evolved into there projects. They see graffiti-artists as publicspace hackers.
They made a hack in for CounterStrike, and they really try to band hacking and streetart — the underground will become overground and they will tear the city apart.
Led Throwies: the story of an open-source perspective.
Magneties, are magnets into ties, and brainstorm way with LED throwies, there giving a workshop on it. (Playing the audience and creating a community beyond a really simple material wrap) It are wrapped LED which you can throw onto objects and vehicles..
Ward & Pat Cunningham's Throwie tackle.
Sustainability is the keynote of the group. They work with the AntiAdvertisingAgency and also Art Rotterdam, for a laserproject. They took over the INGbuilding with a lasergraffiti, and after released some code openSource for other people to work with it » C++ libraries at openFrameworks.
And the mobile broadcast unit has arrived in Barcelona!