8. Mario Lombardo: The Wow Signal and The Emotional Effect
From 2001 until the end of 2006, Mario Lombardo was Art Director for the music magazine SPEX. In addition, he has been a member of the jury for various design and photography awards and has taught typography, editorial and music design at several different art and design schools. Since 1995, he has been looking after a number of music and fashion labels and magazines, such as Dummy and Liebling. Over recent years he has received over 50 national and international design awards. In 2004 he set up his own design studio in Cologne.
The “visual tree house” between selling and emotion. Memetics and memory. Pop and culture. Haves and wants. Shoulds and coulds. Mario Lombardo talks about his latest years in popular culture. 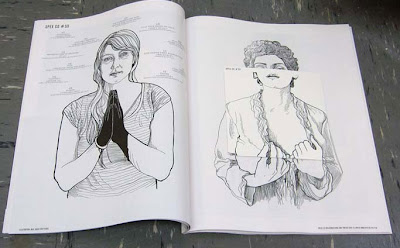 A fairly variated approach showing more than just the work, giving a bit of background to the lift the stiry onto a different level. showing a lot of SPEX issues, but also showing overall work, like Background records (especially Andy Vaz) and others (check site) Mario shows no lack of creativity and focusses very often on alternative and handmade coverlayout and designs, oftenly working analog, pasting and scanning in a rather collage-style, but none-the-less very playfull.